Welcome to this tutorial about RESTful API using Node.js (Express.js) and MongoDB (mongoose)! We are going to learn how to install and use each component individually and then proceed to create a RESTful API.

Check out the updated version of this post with Angular 9+, Node.js 12+ in here: Modern MEAN Stack Tutorial with Docker

What is a RESTful API?

REST stands for Representational State Transfer. It is an architecture that allows client-server communication through a uniform interface. REST is stateless, cachable and has property called idempotence. It means that the side effect of identical requests have the same side-effect as a single request.

HTTP RESTful API’s are compose of:

Here is a summary what we want to implement:

NOTE for this tutorial:

In this section, we are going to install the backend components of the MEAN stack: MongoDB, NodeJS and ExpressJS. If you already are familiar with them, then jump to wiring the stack. Otherwise, enjoy the ride!

MongoDB is a document-oriented NoSQL database (Big Data ready). It stores data in JSON-like format and allows users to perform SQL-like queries against it.

You can install MongoDB following the instructions here.

If you have a Mac and brew it’s just:

After you have them installed, check version as follows:

The Node official definition is:

Node.js® is a JavaScript runtime built on Chrome’s V8 JavaScript engine. Node.js uses an event-driven, non-blocking I/O model that makes it lightweight and efficient. Node.js’ package ecosystem, npm, is the largest ecosystem of open source libraries in the world.

In short, NodeJS allows you to run Javascript outside the browser, in this case, on the web server. NPM allows you to install/publish node packages with ease.

To install it, you can go to the NodeJS Website.

Since Node versions changes very often. You can use the NVM (Node Version Manager) on Ubuntu and Mac with:

Check out https://github.com/creationix/nvm for more details.

Also, on Mac and brew you can do:

After you got it installed, check node version and npm (node package manager) version:

ExpressJS is a web application framework that runs on NodeJS. It allows you to build web applications and API endpoints. (more details on this later).

We are going to create a project folder first, and then add express as a dependency. Let’s use NPM init command to get us started.

Notice that after the last command, express should be added to package.json with the version 4.14.x.

Mongoose is an NPM package that allows you to interact with MongoDB. You can install it as follows:

If you followed the previous steps, you should have all you need to complete this tutorial. We are going to build an API that allow users to CRUD (Create-Read-Update-Delete) Todo tasks from database.

We are going to create, read, update and delete data from MongoDB using Mongoose/Node. First, you need to have mongodb up and running:

Keep mongo running in a terminal window and while in the folder todoApp type node to enter the node CLI. Then:

Great! Now, let’s test that we can save and edit data.

If you take a look to Mongo you will notice that we just created an entry. You can easily visualize data using Robomongo:

You can also build the object and save it in one step using create:

So far we have been able to save data, now we are going explore how to query the information. There are multiple options for reading/querying data:

You can also add queries

You can chain multiple queries, e.g.:

Moving on, we are now going to explore how to update data.

Each model has an update method which accepts multiple updates (for batch updates, because it doesn’t return an array with data).

Alternatively, the method findOneAndUpdate could be used to update just one and return an object.

As you might noticed the batch updates (multi: true) doesn’t show the data, rather shows the number of fields that were modified.

Here is what they mean:

update and remove mongoose API are identical, the only difference it is that no elements are returned. Try it on your own ;)

Middlewares are pluggable processors that runs on each request made to the server. You can have any number of middlewares that will process the request one by one in a serial fashion. Some middlewares might alter the request input. Others, might create log outputs, add data and pass it to the next() middleware in the chain.

We can use the middlewares using app.use. That will apply for all request. If you want to be more specific, you can use app.verb. For instance: app.get, app.delete, app.post, app.update, …

Let’s give some examples of middlewares to drive the point home.

Say you want to log the IP of the client on each request:

Notice that each middleware has 3 parameters:

You can also specify a path that you want the middleware to activate on.

And finally you can use app.get to catch GET requests with matching routes, reply the request with a response.send and end the middleware chain. Let’s use what we learned on mongoose read to reply with the user’s data that matches the id.

Notice that all previous middlewares called next() except this last one, because it sends a response (in JSON) to the client with the requested todo data.

The following middlewares are not added by default, but it’s nice to know they exist at least:

Wiring up the MEAN Stack

In the next sections, we are going to put together everything that we learn from and build an API. They can be consume by browsers, mobile apps and even other servers. 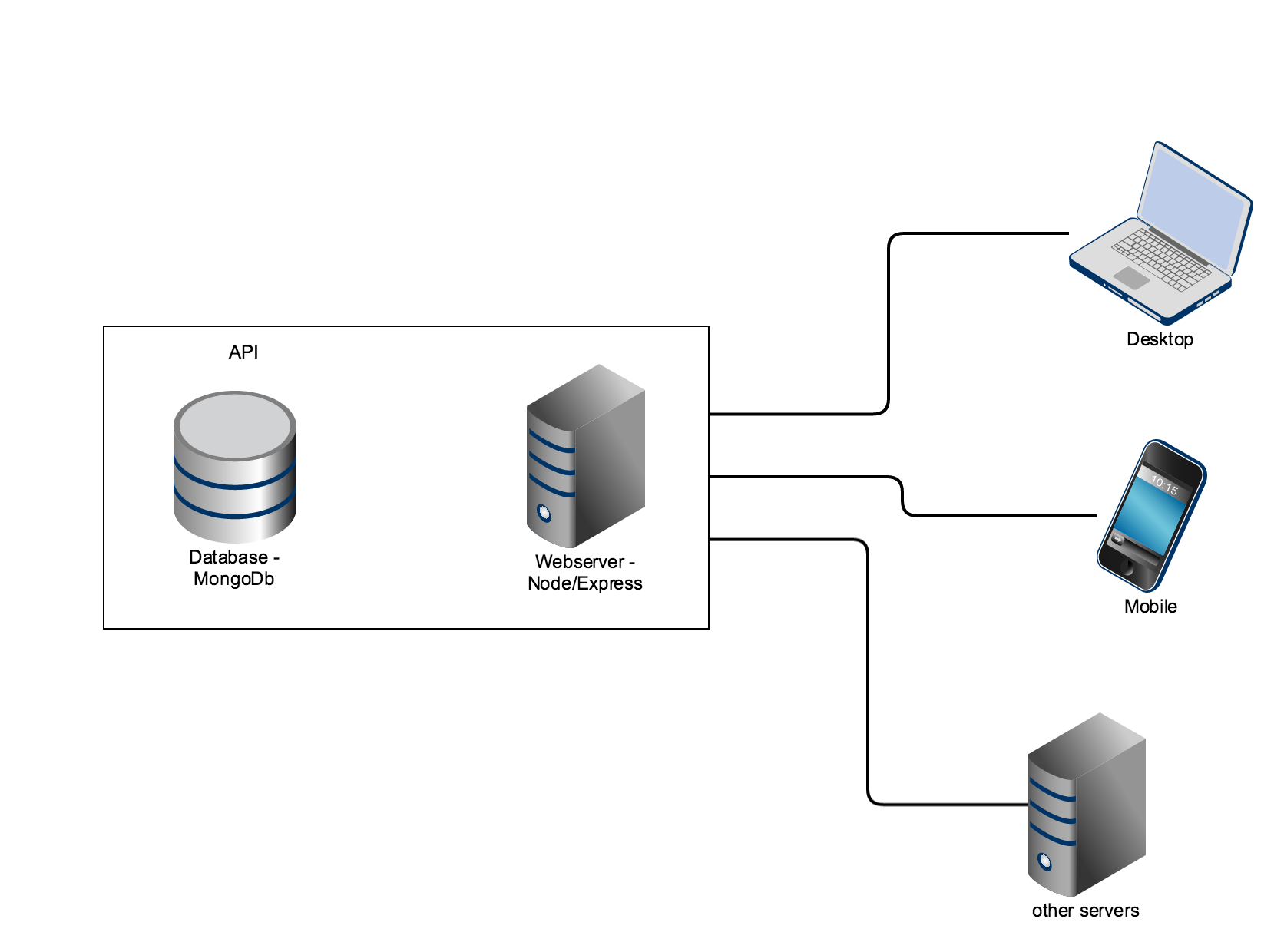 After a detour in the land of Node, MongoDB, Mongoose, and middlewares, we are back to our express todoApp. This time to create the routes and finalize our RESTful API.

Express has a separate package called express-generator, which can help us to get started with out API.

This will create a new folder called todo-api. Let’s go ahead and install the dependencies and run the app:

In this section we are going to access MongoDB using our newly created express app. Hopefully, you have installed MongoDB in the setup section, and you can start it by typing (if you haven’t yet):

Notice --save. It will add it to the todo-api/package.json

Next, you need to require mongoose in the todo-api/app.js

Now, When you run npm start or ./bin/www, you will notice the message connection successful. Great!

You can find the repository here and the diff code at this point: diff

Creating the Todo model with Mongoose

It’s show time! All the above was setup and preparation for this moment. Let bring the API to life.

Create a models directory and a Todo.js model:

What’s going on up there? Isn’t MongoDB suppose to be schemaless? Well, it is schemaless and very flexible indeed. However, very often we want bring sanity to our API/WebApp through validations and enforcing a schema to keep a consistent structure. Mongoose does that for us, which is nice.

You can use the following types:

I know you have not created any route yet. However, in the next sections you will. These are just three ways to retrieve, change and delete data from your future API.

If you open your browser and type localhost:3000/todos you will see all the tasks (when you implement it). However, you cannot do post commands by default. For further testing let’s use a Chrome plugin called Postman. It allows you to use all the HTTP VERBS easily and check x-www-form-urlencoded for adding parameters. 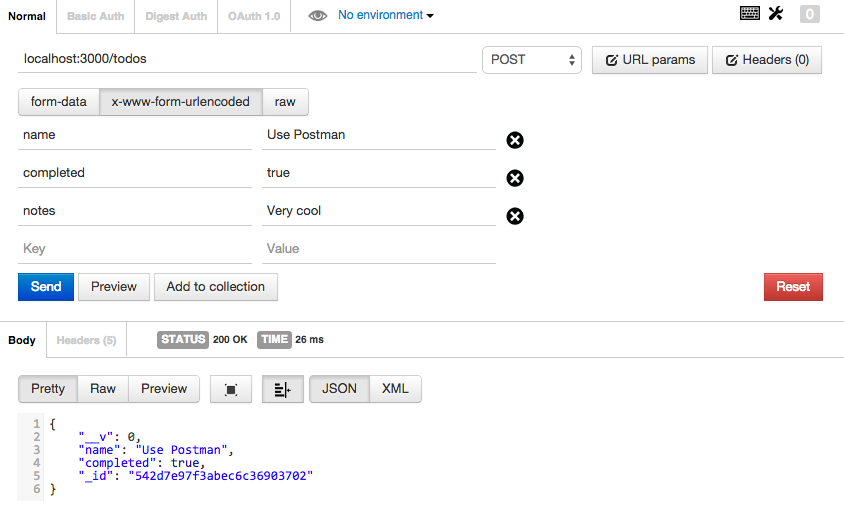 Don’t forget to check x-www-form-urlencoded or it won’t work ;)

Probably these are the main consumers of APIs. You can interact with RESTful APIs using jQuery’s $ajax and its wrappers, BackboneJS’s Collections/models, AngularJS’s $http or $resource, among many other libraries/frameworks and mobile clients.

In the end, we are going to explain how to use AngularJS to interact with this API.

To sum up we want to achieve the following:

All set! Now, let’s go back and edit our routes/todos.js.

Remember mongoose query api? Here’s how to use it in this context:

Harvest time! We don’t have any task in database but at least we verify it is working:

If it returns an empty array [] you are all set. If you get errors, try going back and making sure you didn’t forget anything, or you can comment at the end of the post for help.

Back in routes/todos.js, we are going to add the ability to create using mongoose create. Can you make it work before looking at the next example?

Everytime you change a file you have to stop and start the web server. Let’s fix that using nodemon to refresh automatically:

This is a snap with Todo.findById and req.params. Notice that params matches the placeholder name we set while defining the route. :id in this case.

Let’s test what we have so far!

Back in routes/todos.js, we are going to update tasks. This one you can do without looking at the example below, review findByIdAndUpdate and give it a try!

Finally, the last one! Almost identical to update, use findByIdAndRemove.

Is it working? Cool, you are done then! Is NOT working? take a look at the full repository.

Connecting AngularJS with this endpoint. Check out the third tutorial in this series.